AR Makr in the English Classroom

Do you remember making dioramas when you were in primary school? You would beg an old shoe box off your parents, and then cut and glue and create to your heart's content, until you created a 3D model. 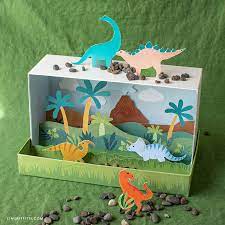 Dinosaur diorama
They were so much fun to create, even if they were a whole heap of work, and a little bit messy.

My Year 7 English class have been studying the novel The War That Saved My Life by Kimberly Brubaker Bradley. For those of you not familiar with the text, it is a middle grades novel, set in English during World War Two. In our last week of term, after the assessments had been completed, I thought it would be a fun idea to have my students create their own dioramas. However, this would be a a diorama with a difference - one designed for 2022, not the 1990s. I am fortunate to work in a school where students have iPads from Year 3 to 8, and then BYOD from 9-12.

The first step was to show my students how Keynote could be used to create graphics that could be featured in their dioramas. To assist them with this, I made the following video:

I asked the students to watch the video before coming to class, as well as to ensure they had AR Makr installed on their iPads. In class we watched the video together again. I then modelled how to create the artefacts in Keynote, encouraging the students to work along with me. I knew they would be far more creative than me, and I was not wrong. Once the students had created their artefacts in Keynote, the next step was got import them into AR Makr and layer them up and add movement. I was fortunate that I had a learning support assistant (LSA) with me for the lesson, so once the demonstration stage was finished, she and I circulated the room, assisting students with their digital dioramas.

I have permission to share two of the students work, which I will share below. Of course, a video cannot truly capture an AR scene, as it does not allow for it to be interacted with in the same way, but hopefully it gives you an idea of what the students created.

Have you used augmented reality in your classroom? How did it go?

Hi Tori, We are using EyeJack app this term in Year 1, working on our photo taking and keynote skills at the moment leading up to hopefully an interactive Gallery Walk of our art work through our new building by late September. Your guidance and tips are super helpful. Thanks

I remember this shoebox activity from when I was at school! I love the potential of AR. I have use ARMakr but haven't imported from keynote yet, I'll have a go this week.

jj_pj, I love that you are already influenced by this lesson. Thank you, ToriSS for sharing and helping fellow educators see possibilities.

How did it end up going?

What a great idea to replace and up level the diorama/shoebox. It gives so much more opportunity for creativity and purposeful placement of items in the scene. I remember in the past students were limited by what they could find in their homes (producing some products that didn't really hit the mark they were going for). Using digitally made assets provides endless options). Bravo!

Love this - thanks for the instructional video. We did something similar to build an AR Book Scene. Students in my Middle School class drew the pictures in Tayasui Sketches Pro by tracing images they took or found online and exported them with a transparent background. Then they used the AR MAKR app to build their scenes. It worked out great!

Here's my example for the project using the Narnia books as illustration: